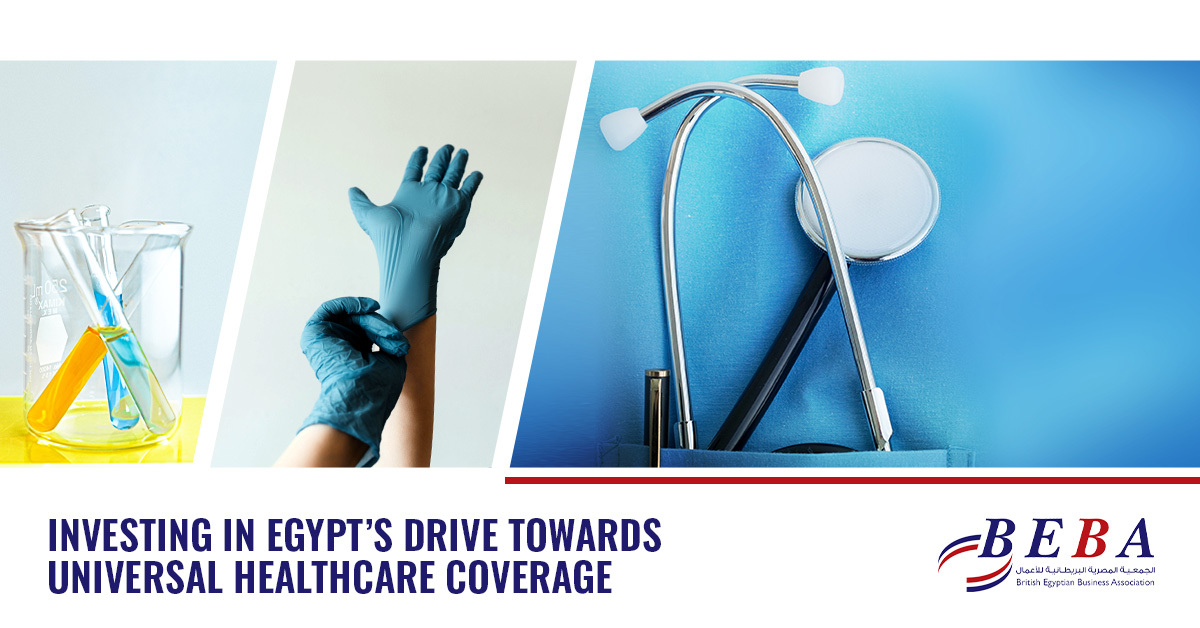 Egypt’s healthcare system is undergoing a period of rapid transformation, creating major opportunities for investment. A key driver behind this change is the Egyptian government’s commitment to implementing Universal Healthcare Coverage on behalf of its fast-growing population by 2030.

From increased provision of hospital beds to expanded investment in medical personnel and technology, healthcare in Egypt is poised for far-reaching development. At the heart of this healthcare transformation are public-private partnerships, which play a critical role.

As Egypt prepares to host COP27 in Sharm El-Sheikh in November, the conversation around Egyptian healthcare infrastructure is heating up. One key forum in the run-up to COP is BEBA’s UK Business Mission, where UK-Egyptian ministers and industry leaders will gather in London to discuss the practicalities and investment opportunities surrounding Egypt’s drive toward Universal Healthcare Coverage.

To understand the opportunities at play within the Egyptian healthcare system, it’s impossible to overstate the impact of demographic change.

For one, Egyptians are living longer, with average life expectancy increasing almost six years to 72.5 years since the turn of the century. While these advances in longevity are to be celebrated, they also accelerate demand for Egyptian healthcare services.

It is not simply increased longevity at play, though. An exploding population — from 68 million people in 2000 to approximately 102 million by 2020, primarily driven by an increased birth rate and sharp declines in child mortality — is adding urgency to the mix. By 2050, the population is projected to reach anywhere in the region of 150-190 million, an astonishing rate of growth.

Universal Healthcare Coverage (UHC), as defined by the World Health Organisation (WHO), requires “that all people have access to the health services they need, when and where they need them, without financial hardship”. About 100 million people worldwide are pushed into extreme poverty each year because of out-of-pocket spending on healthcare, according to the WHO.

Understanding The Healthcare Landscape in Egypt

Healthcare services in Egypt are currently operated and financed by a pluralistic network of public and private providers across the governmental, parastatal and private sectors, overseen by the Ministry of Health and Population (MoHP).

The parastatal sector comprises quasi-governmental organisations such as the Health Insurance Organization (HIO) and the Curative Care Organization (CCO). HIO presently covers about 60% of the population, with basic coverage to employees, students, and widows through its system of hospitals and clinics. CCO offers inpatient and outpatient care through private provision. Meanwhile, Egypt’s public healthcare system contends with long-standing challenges of underfunding, variability in service quality, and high out-of-pocket payments.

Together, it is a patchwork of systems that Egypt’s national strategy is seeking to address, and which prompted the passing of the Universal Health Insurance Law in 2018. The law seeks to restructure Egypt’s healthcare provision by providing affordable Universal Healthcare Coverage for all, in line with the health pillar of Egypt’s Vision 2030 Sustainable Development Strategy.

For its part, the international community has welcomed Egypt’s efforts. Notably, in 2020 the World Bank provided 400 million USD in support of the nation’s move toward universal health insurance.

Without underestimating the challenges ahead and the need for sustained investment, early signs of progress are evident:

Chronic Hepatitis C Virus (HCV) was a major problem in Egypt until only recently. “In 2015, an infection prevalence of 7% among adults was among the highest in the world and accounted for 7.6% of the country’s mortality”, according to a 2021 research paper led by Ahmed Hassanin of New York Medical College.

In response, Egypt began a concerted screening and treatment programme. It screened more than 50 million people and treated more than 4 million of them for HCV. Consequently, it is “poised to be the first country in the world to eliminate HCV within its borders”, the report authors state.

Reproductive health, family planning, and preventative healthcare are also central to the initiative, supported by joint ventures with international partners such as Canada.

Improving the quality of healthcare in remote areas as well as larger urban centres is an important commitment of the Egyptian government.

President Sisi’s ‘Haya Karima’ (‘Decent Life’) initiative — the subject of international praise — has seen large numbers of medical convoys travelling out to remote parts of Egypt to deliver a wide range of medical services including paediatrics, dentistry, ophthalmology, and other specialisms.

One of the key indicators of a nation’s health strategy is how it supports its most vulnerable, starting with its youngest. Data gathered by both UNICEF and the World Bank indicate that, in 2000, the mortality rate among under-fives in Egypt stood at approximately 47 children per 1,000 live births. By 2020, that number fell below 20 deaths per 1,000 births.

While there is still much progress to be made, the improvement in child mortality is a welcome step in the right direction.

The need for healthcare investment cuts across the range — from medical staffing and facilities infrastructure to the provision of medical devices and pharmaceutical supply.

The situation is highly interdependent. The population explosion will surge demand for neonatal and paediatric services. Meanwhile, the uptick in hospital building across Egypt will require an increase in the number of trained medical practitioners available to work in them.

There is certainly catchup to do on staffing. “According to World Bank figures, in 2018 Egypt had an estimated 0.45 physicians per 1000 people, well below the organisation’s estimate of 1.3 for the entire MENA region”, the Oxford Business Group reports.

While steps have been taken to accelerate the traditional ‘Takleef’ system, whereby doctors spend two years in general practice (with an emphasis on underserved populations) before they can specialise, nobody doubts that more needs to be done.

Similarly, as more people gain access to treatment and more medical professionals are available to administer treatment, opportunities for pharmaceutical development will grow.

Pharmaceutical sales have already risen from 2.3 billion USD in 2017 and are expected to reach 5.2 billion USD by 2028. The MoHP has stated that around 80% of pharmaceuticals are produced locally, positioning Egypt to become the leading manufacturer and exporter in the MENA region.

The drive towards Universal Healthcare Coverage produces a burgeoning range of investment and business opportunities in the Egyptian healthcare marketplace. Many of these partnerships will be on full display at the forthcoming Africa Health ExCon, to be held in Cairo in early June.

“We forecast the number of bilateral trade agreements and strategic partnerships to increase over 2022 and beyond. This will provide growing opportunities for multinational pharmaceutical firms to expand their presence in Egypt,” wrote analysts at Fitch Solutions in a recent report.

No one is suggesting that Universal Healthcare Coverage will not require serious funding. England’s Department for Health and Social Care budget for 2020/21 was £190.3 billion – or approximately 10% of GDP. Meanwhile, France’s Universal Healthcare Coverage, which has long been considered among the best in the world, presently costs the nation around 11% of GDP. Egypt’s expenditure currently hovers around 5%.

Nonetheless, the direction of travel for Egypt is clear, and the strategic policy measures in place set the stage for continued investment in the provision of healthcare goods, services, and training. While much has been done in the drive towards Universal Healthcare Coverage, there is much still to do.

Hear from top ministers and leading UK-Egyptian industry executives as they explore the challenges and investment opportunities relating to Egypt’s healthcare expansion.

Learn more about BEBA and the UK Business Mission on the dedicated Mission page, and check out the event programme for the full list of sessions.

HE Maged EL Menshawy is CEO of Manapharma & Vice Chairman of BEBA. Since founding Manapharma in 1985, Mr. EL Menshawy has developed business interests in such sectors as Textiles, Chemicals, Cosmetics, Pharmaceuticals, Medical Supplies and Commodities trading.