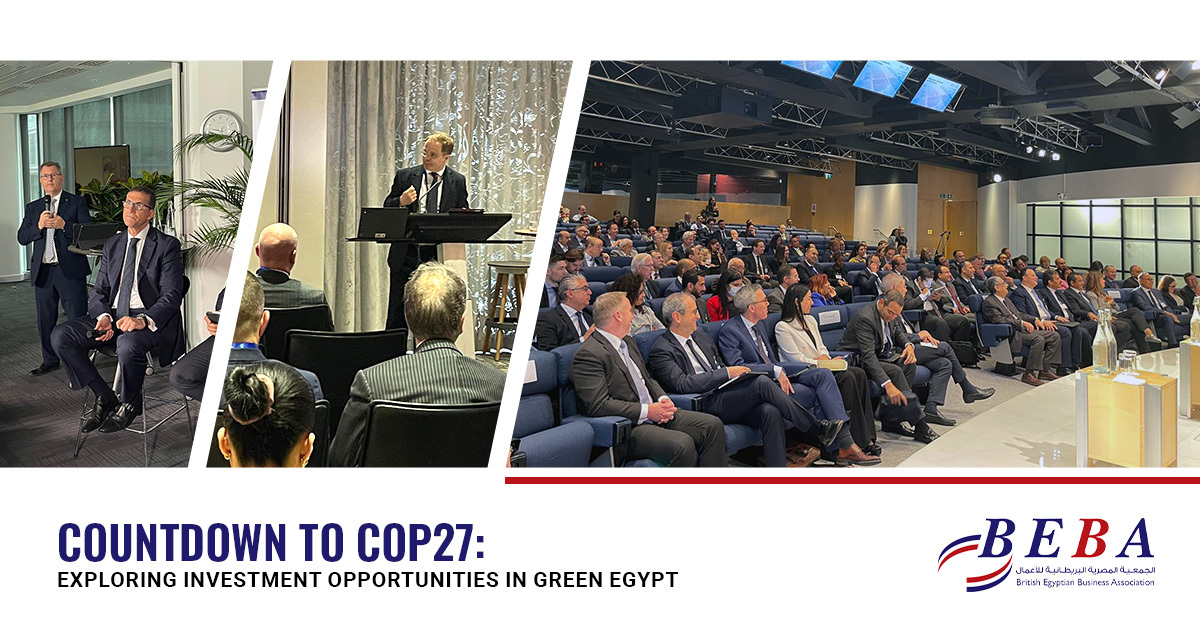 As the countdown to COP27 begins, it’s time to review BEBA’s highly successful 2022 Business Mission to the UK, entitled ‘The Road to COP27: Bridging the Implementation and Financing Gap’.

This was the seventh BEBA mission to the UK, with four Egyptian Ministers and four government officials participating in-person along with the Egyptian and British ambassadors. In addition, three Ministers contributed to the mission by recording videos that were played in different sessions.  More than 70 delegates from Egypt offered their expertise—from business sectors as diverse as renewable energy, banking and pharmaceuticals.

Paving the Way for COP27

It was a busy mission with a host of topics on the agenda, with climate policy a signature theme. The event comes in the approach to COP27, to be hosted in the Red Sea resort of Sharm El-Sheikh in November.

Subjects discussed during the multi-day mission included the significant environmental, infrastructure and healthcare-related improvements that Egypt has seen in recent years. Also on the docket was the considerable scope for international partnership that these present, both now and moving forward.

Notably, the event highlighted how Egypt is working hard to tackle the global climate emergency in a sustainable and fiscally responsible way.

From Pledges to Implementation

This year’s BEBA sessions dealt with many of these issues head-on. The sessions demonstrated how Egypt and Britain are already working together on building future-proof finance and sustainable green infrastructure projects—all in the spirit of Egypt’s Sustainable Development Strategy, known as Egypt Vision 2030.

Speaking to the press during the mission, HE Dr. Rania Al-Mashat, Egypt’s Minister for International Cooperation said that, for her, the priority for COP27 is “moving from pledges to implementation”.

Implementation is, indeed, everything. BEBA’s opening day dealt directly with the demonstrable steps Egypt is taking to implement climate-focussed business strategies, with an emphasis on green financing.

This was a two-part event, hosted by PwC at its UK offices in central London, looking first at climate implementation. Virtual contributions were made, by video, from HE Dr. Yasmine Fouad, Egypt’s Minister of Environment and HE Sameh Shoukry, Egyptian Minister for Foreign Affairs.

There was much to discuss. Minister Sameh Shoukry highlighted the significance of COP27, following the successful outcome of COP26 with the near completion of the Paris Agreement, the adoption of the Glasgow Climate Pact, and the broad range of pledges from governments and stakeholders. Minister Shoukry reiterated the importance that now is the time for action, to move from text to actual implementation on the ground, and that COP27 will focus on actual implementation.

HE Dr. Yasmine Fouad, Minister of Environment and the Ministerial Coordinator and Envoy of COP27, stressed that COP27 will be the largest event that Egypt has hosted. She insisted on the importance of including different segments of society to participate in the global fight against climate change.

HE Dr. Rania Al-Mashat, Egyptian Minister of International Cooperation, stated that as the world aligns its efforts to build back from the COVID-19 pandemic, climate change has been pushed to the forefront of the international agenda.

Indeed, Egypt is already taking on the challenge of climate implementation with urgency. In 2015, the country launched its ‘feed-in tariff’ for renewable energy, which led to the development of the Benban Solar Park—one of the world’s largest solar power installations, created through a multi-stakeholder public/private partnership including EBRD and IFC, among other international financial institutions.

Egypt is also home to Gabel El Zeit Wind Farm Complex, the largest wind farm in the MENA region. The complex features the West Bakr Wind project, developed and built by clean energy company Lekela. All of this takes advantage of what Lekela calls Egypt’s “world-class wind resource”.
Currently, Egypt generates approximately 6GW of renewable energy, one third of which has been developed through private investment. This constitutes a major contribution to Egypt’s goal of generating 42% of its power through renewables by 2030.

Seminar #2 – Innovative Financing: The Key to a Green Economy

The second part of the PwC-hosted event threw the spotlight onto the green finance innovations Egypt has put into place to help deliver on its climate commitments. This event featured Special Guest Speaker HE Dr. Rania A. Al-Mashat, Minister of International Cooperation.

Again, there was much already on the table for discussion. For instance, in 2020 Egypt led the way in the issuance of its Sovereign Green Bonds, standing as the first country in the MENA region to undertake such an initiative. These bonds offer similar returns to traditional investments, but are, as the World Bank describes them, dedicated to connecting “environmental projects with capital markets”.
Notably, this strategy was brought about by close collaboration between the Egyptian Ministry of Finance (MoF) and Ministry of the Environment (MoE), which worked together to create a sustainable framework for the bonds’ successful deployment.

The talk of the town are Egypt’s fiscal policies and measures taken to curtail the implications of the economic crisis. The past few years have seen global events that have caused economic turmoil, starting with the USA-China trade war, followed by the COVID-19 pandemic, and the current Russia-Ukraine war. The Egyptian economy did not collapse during the pandemic, however, as it did not take extreme measures and enter into a complete lockdown, and that’s why the country did not have a huge decline in its GDP growth rates.

This seminar was, appropriately, delivered in partnership with British International Investment and it dealt with positive ways of leveraging partnerships to drive adaptation and resilience in Egypt.

A panel of experts discussed harnessing international partnerships that can result in the creation of clean, green and sustainable infrastructure.

This is nothing new to Egypt, where finding ways to make finance greener has been central to its planning for some time. For instance, The Sovereign Fund of Egypt (TSFE) works to encourage public/private partnerships, with the focus on sustainable development.

This is good news for foreign direct investors. A green Egyptian economy creates an even more diverse array of investment opportunities for businesses looking to expand into the Egyptian market and, beyond that, into the wider Africa continent.

The seminar closed with a recorded video by HE Dr. Hala El Said, Egypt’s Minister of Planning & Economic Development in which she stated that according to reports from the Intergovernmental Panel on Climate Change (IPCC) the warming in Egypt, Africa, and the MENA region are projected to be higher than the global average.

In partnership with the Arab Bankers Association, this session directly addressed issues around Egyptian banking and finance. The keynote speaker was HE Dr. Mohamed Maait, Egypt’s Minister of Finance.

Panellists from the government joined private sector business leaders to explore the ongoing transformation in Egypt’s economy—through its robust support of green finance and commitment to significant public/private partnerships. The emphasis remained firmly on the impact climate issues can have on the banking sector and fiscal policies.

Egypt is showing, in the countdown to COP27, that the countries of MENA can build mutually beneficial partnerships that drive smartly financed projects which are economically and environmentally sustainable at the same time.

Seminar #5 – Infrastructure, Renewables and the SCEZ

Egypt takes seriously its role in helping to address the threat climate change presents to the wider African continent. The IPCC’s most recent assessment illustrates, in graphic detail, how the climate emergency isn’t some abstract concept for an ill-defined future. In Africa, it is a present-day reality.

It’s perhaps no surprise then that Egypt’s Vision 2030 strategy closely aligns with the African Union’s Agenda 2063. It is important to Egypt’s future — as well as to its business partners — to take a lead in greening Africa.

This next session on Egypt’s innovations in infrastructure explored what climate-driven infrastructure development means in practice. It was presented in partnership with EBRD and speakers included HE Yehia Zaki, Chairman of the Suez Canal Economic Zone and Ayman Soliman CEO of the Sovereign Fund of Egypt.

Projects are turning around fast. For instance, faced with the challenge of water scarcity, Egypt is looking to private investment to help build an infrastructure of solar-powered desalination plants.

Meanwhile, Egypt’s population is growing exponentially— from 68 million in 2000 to more than 100 million today. As that population becomes increasingly urban, this throws up a range of challenges which, in turn, provide significant private sector investment opportunities in key infrastructure projects. One such infrastructure project is already on the rails, quite literally—namely, the Cairo monorail project.
Moreover, Egypt is implementing an infrastructure plan which is staggering in its ambition: the decision to build 45 new cities. These cities—like the already completed 6th of October City – will be designed with a view to signing up for EBRD’s Green Cities programme, ensuring that they will provide new homes and new employment for Egypt’s growing population, in a sustainable way.

Of course, a growing population also brings with it a need for healthcare, which Egypt is addressing proactively, as was demonstrated in the next session.

The closing session of BEBA’s business mission was hosted by the Arab-British Chamber of Commerce and dealt with Egypt’s drive towards Universal Healthcare Coverage. The panel of experts and dignitaries was headed by HE Dr. Khaled Abdel Ghaffar, Egypt’s Minister of Health.

Part of Egypt’s Vision 2030 commitment is to develop universal healthcare for its growing population. This will offer up various opportunities for inward investment across services and expertise, as Egypt will need to expand both medical facilities and medical practitioners as well as medical devices and pharmaceutical supplies.

Egypt is already well positioned to take a leadership role in the MENA region, as a dominant manufacturer of pharmaceuticals. Indeed, the Ministry of Health and Population (MoHP) has stated that around 80% of Egypt’s pharmaceutical demands are already produced locally. It is just a short step to becoming a major exporter — potentially opening-up the entire African continent to Egypt’s business partners.

The Countdown to COP27: The Clock is Running

The African nations understand that, when it comes to tackling climate change, the clock is running. This isn’t something to think about another day — it’s something to act on today.

Egypt knows this and has moved past the pledges to the active implementation of the commitments it (and 195 other parties) made in The Paris Agreement at COP21, by taking significant strides in planning, financing and delivering on a green economy and green infrastructure in a sustainable future-focused way.

As Egypt plans to demonstrate at COP27, such promises and plans, put properly and sustainably into action, are the way forward for all nations already facing the stark reality of the climate emergency. In turn, this will generate continued and material opportunities for foreign direct investment. The conditions for these investment opportunities were thoroughly explored during BEBA’s seventh annual business mission to the UK.

Credit where it’s due. The 2022 BEBA Mission to London was brought to you in association with these generous sponsors:

Khaled Nosseir is Chairman of BEBA and of Alkan Holding, which is part of the Alkan Group. Founded in 1974, Alkan successfully operates a wide range of business activities with subsidiaries and branches in 17 countries across the Middle East and Africa.